Global state-owned investors embraced opportunities in the Covid-19 pandemic to increase the pace of direct investments during the first half of the year, to the extent that 2021 looks set to be their busiest ever in the venture capital space, according to a new update by Global SWF.

In addition, several are next eyeing in-house start-up firms in the months and years to come, along with placing more emphasis on sustainability.

The value and volume of transactions by state-owned investors respectively increased 22% and 35% in the first half of 2021 compared to the second half of 2020, according to data from the sovereign wealth fund (SWF)-focused agency. “We predict that 2021 is set to be a record-breaking year for venture capital investments by state-owned investors,” Daniel Brett, head of research and data at Global SWF, said in a July 15 webinar to present the findings.

The asset owners conducted 164 venture capital investments in the first six months of 2021, according to Global SWF. The current full-year record stands at 200 transactions, conducted during 2018.

Singapore’s $550 billion sovereign wealth fund GIC was the most active state-owned investor while its local peer Temasek, with $284 billion in AUM, was the busiest venture capital investor. The latter deployed $2.3 billion in start-ups and venture capital funds in the first half, bringing its total since inception to $12.3 billion, according to Global SWF data.

Middle East funds were generally less active during the first six months of the year. The one exception was the Kuwait Investment Authority (KIA), which took stakes in state assets to help fund a budget deficit created by low oil prices. It was the second most active investor by value.

In terms of sectors, technology and healthcare deals more than doubled as a proportion of transaction value in the first half of 2021, compared the same period of last year. Biotech, foodtech and agri-tech were also popular as sovereign wealth funds become more concerned with climate change and sustainability.

In contrast, financial services and retail garnered less attention from the investors, amid fear of low returns in these sectors.

Other areas of interest in the first half included infrastructure and real estate, plus data centres and logistics, in line with pandemic-induced consumer trends.

Another consequence of the pandemic for sovereign wealth funds (SWFs) has been the exacerbation of a home bias. This confirms findings by an International Forum of Sovereign Wealth Funds report published in May. 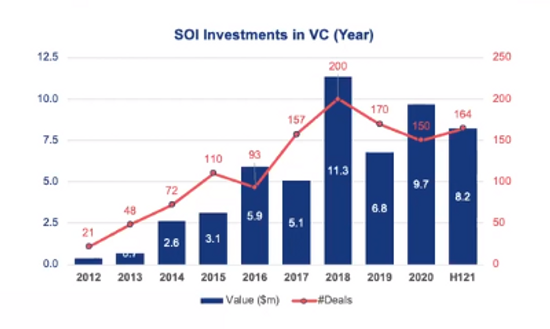 The findings highlight the dilemma that many sovereign investors often face – how to balance long-term investment mandates with short-term crisis management.

Brett highlighted Kuwait’s KIA as an example of a SWF that was asked by the government to buy performing assets to help it narrow its budget deficit. Its domestic investments since the onset of Covid-19 include national oil company Kuwait Petroleum Corporation.

Going forward, Global SWF believes that state-owned investors will develop a rising number of in-house start-ups, despite the risk that starting companies from scratch represents.

In a similar manner to its early foray into venture capital, Temasek is at the forefront of this development. Its home-grown start-ups include travel pass software provider Affinidi and cyber security company Istari.

“Temasek’s strategy [of developing its own Singapore based in-house start-ups] is likely to be increasingly the norm in the state-owned investor universe,” said Brett.

Looking ahead, Brett thinks SWFs will move away from crisis management towards a focus on yield. They are also likely to place more attention on sustainability and climate change, in line with increasing general awareness around these issues.