As a pioneer of environmental social and governance (ESG) investment in Japan, Dai-ichi Life has always set a high bar. But now with a three-year goal to integrate ESG into the entire portfolio, doubling ESG-themed investment to $12 billion by 2023, even the life insurer admits it's on a tight schedule.

Kazuyuki Shigemoto, Dai-ichi Life’s executive officer and general manager of investment division, told AsianInvestor that government bonds and private asset buyouts are likely to be the most challenging parts of the project, due to issues that include the potential double-counting of greenhouse gas exposures.

In a worst-case scenario, he said, Dai-ichi may not consider compliance of greenhouse emissions in government bonds. And for those investee companies that fail to significantly cut greenhouse gas emissions in the near future, the life insurer could consider divestment.

Government bonds and privae assets account for almost 55% of Dai-ichi's investment assets. As of March 31, 2021, the life insurer has ¥37.85 trillion ($348.2 billion) of assets under management, and has its sights firmly set on an entire ESG portfolio in just two years' time.

“I personally think that is pretty difficult,” Shigemoto told AsianInvestor. “Now we include greenhouse gas emissions, plastic waste, diversity and governance [in credit ratings in fixed-income and growth ratings in equities]. Other criteria are also emerging. I think we need to do many, many things over the next three years.” 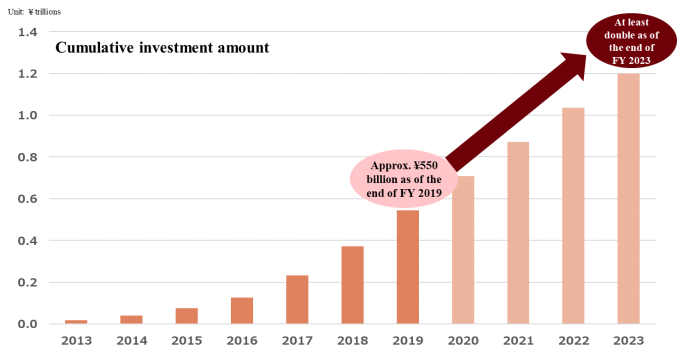 “With traditional assets like listed equities or investment-grade corporate bonds, it's relatively easy, because we will change the mandate by changing the benchmark to the asset managers. Those activities are changing their investment attitude. So that’s okay,” he said.

But for outsourced assets, such as private equity funds, hedge funds, or high-yield bonds in the United States, Shigemoto said that Dai-ichi needs to change the mandate, or change managers, or have a dialogue with asset managers to change their investment policies.

Private equities currently account for about 4% of Dai-ichi’s AUM.

Among the different private asset classes, he noted that infrastructure investment tended to be sensitive to ESG, especially renewable energy-related projects. However, when it came to a buyout or a venture, their high return-driven nature made it hard for asset owners to adopt ESG principles, he said.

To move forward, Shigemoto said Dai-ichi needed to communicate with private asset managers to encourage them to sign the United Nations Principles for Responsible Investment, which the life insurer signed in 2015.

“I'd like them to assess their investment policies and investment processes to match UN’s PRI. I think that's the first step,” he said.

In early March, Dai-ichi joined the Net-Zero Asset Owner Alliance, becoming the world’s 35th member and Asia’s first. The alliance has 37 institutional investors across the world, with a total AUM of $5.7 trillion. They include world-leading insurers and pension funds.

By joining the alliance, Dai-ichi commits to reducing greenhouse gas (GHG) emissions from its investment portfolio to net-zero by 2050, and aims to transition to a portfolio consistent with the Paris Agreement’s objective of limiting the post-industrial average temperature rise by less than 1.5°C.

Since joining the alliance, Dai-ichi has been in active discussions on ESG principles and methodology with the other 36 asset owners around the world.

They agreed that corporate bonds should be the first to set up targets on GHG emissions reduction. The second target would be government bonds, followed by corporate loans, which are the most illiquid of fixed income assets, Shigemoto said.

Fixed income investments dominate Dai-ichi’s $348.2 billion portfolio, making up 74% of the total, with 50% of domestic and foreign government bonds, and 14% of corporate bonds.

Shigemoto said the insurer does not yet have a gameplan to accurately measure government bonds' compliance to GHG emissions, noting that it is difficult to isolate them.

The company now plans to expand impact investments into listed equities, which will require talking to their top management about ESG compliance. Currently, Dai-ichi's 13.6% of assets are in listed equities.

“We are stressing the importance of engagement with investee companies,” Shigemoto said.

More specifically, if they reduce the GHG emissions dramatically over the next 5 years, Dai-ichi wil not consider changing the portfolio. However, if they do not, Dai-ichi will need to carry out divestments, he said.

Dai-ichi President Seiji Inagaki told local media recently that the company plans to cut GHG emitted by companies it holds shares and bonds in by 25% by 2025.

That said, Shigemoto said Dai-ichi will cooperate with other asset owners in the alliance, and the alliance of the banking industry, to affect and pressurise companies and governments on cutting GHG.

He stressed that while Dai-ichi, with an investment team of 300 professionals, is prepared to undertake responsible investment by themselves, if the target became difficult to reach internally, they would consider outsourcing to ESG funds provided by big names, such as BlackRock’s World ESG Insights equity fund launched in April.

“We do not have professionals in some areas like high-yield bond in the US or Europe, and also middle-market private debt, or leveraged loan in the US," Shigemoto said. "So those kinds of areas, we outsource investment activities to outside managers. If we need to set ESG principles in those areas, we need to have a dialogue with asset managers to change the mandate,” he reiterated.

Dai-ichi is the only listed life insurer in Japan, with 40% overseas shareholders and 60% domestic.

Even without ESG-sensitive international investors, Shigemoto said that Japan's domestic investors were becoming increasingly sensitive to ESG investment, especially the younger generation following Prime Minister Yoshihide Suga's announcment in 2020 that the country is seeking a net-zero goal by 2025.

This article has been updated to clarify Dai-Ichi Life Insurance's concerns about measuring greenhouse gas emissions in government bonds.

Regional asset owners are still wary of volatile cryptocurrencies, but they say central bank-backed digital currencies could become investment friendly over the next five to 10 years.
Asset Owners
Jolie Ho

Dai-ichi Life has set concrete ESG goals and made impact investments regularly, while Japan is seen leading other Asian markets when it comes to ESG.
Asset Owners
Shusi He

ESG in sovereign bonds: treading the thin line between engagement and politics

Engagement with sovereigns ensuring bond investments are environmental, social, and governance (ESG)-compliant doesn’t have to be politically sensitive - but you need to be careful.
Alternatives
Jolie Ho

While most big Japanese insurers are maintaining their allocation to domestic stocks, Dai-ichi Life has said that it will slash its interest rate and equity risk by 20% by March 2024.
Moves
Staff Reporters