For private equity in China, 2020 was the great comeback year, but going forward investors are likely to find it more difficult to secure investments due to higher valuations and increased competition, according to a new report. The Asia-Pacific Private Equity Report 2021, published by Bain & Co., showed that deal value in Greater China rebounded sharply in 2020 after a 35% drop in 2019, jumping 42% to $92 billion. The five-year average also rose 22% compared with the previous five years.

The Greater China markets led deal-making activity in Asia Pacific, contributing more than 2.5 times the deal value of India, which ranked second, according to the report.

Because of the mounting stores of unspent capital from last year, general partners (GPs) will have to make more effort to lock in new investments with reasonable valuations, said Zhou Hao, partner at Bain & Co, during a media briefing held on Tuesday (April 27).

He added that quality target assets are limited in China, making it more difficult for investors to secure new investments because of higher competition.

The findings mirrored the market environment in Asia Pacific in general where, although GPs and limited partners (LPs) had braved tough investment conditions, they had been surprisingly active throughout the last year, the report found.

Nearly 80% of the 162 senior market practitioners surveyed said they expected the macroeconomic climate to be more favourable, given the approval of vaccines last December, but high valuations was among one of their biggest concerns.

GPs felt the effects quickly, according to the report, with 40% saying valuations increased in 2020, and 63% saying higher multiples were one of their top concerns. A strong majority, nearly 75% of surveyed investors, expected prices to stay the same or increase over the next two years. 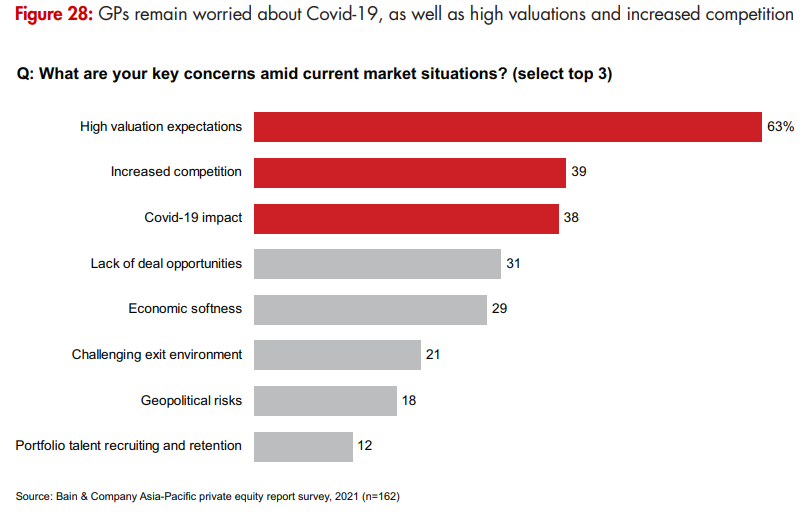 In terms of sectors, healthcare and technology deals still sit at the top and contributed more than 50% of Asia Pacific deal value.

Ng Chee Yuen, chief executive officer at Singapore-based Shenning Investments, told AsianInvestor that investors all over the world had shown huge interest in tech-PE assets. He believed the return from some of the Chinese unicorns companies remained attractive.

While headlines, including those regarding Ant Group, had put investors in a moody frame of mind, Ng said he believed it was inevitable that innovation would bring some risk to the tech sector, and not just in China. ESG was another area that investors had been keen to focus on.

“ESG has been bringing higher standards for many investors and firms globally, although most PEs are still at an early stage. Fully embedding ESG in the investment process is increasingly important, as it’s going to become non-negotiable for many LPs,” Zhou said. “ESG is increasingly viewed by investors as an additional variable that identifies superior returns and guides investment decisions.”