The decision by index provider FTSE Russell to include Chinese sovereign bonds into its flagship index is likely to lead $150 billion of foreign investor assets to flow into the nation’s government debt. However, the inclusion is giving some international investors concern about the impact of considerable political and economic tensions between China and the US.

Concerns about China’s restrictive currency and capital controls have already led to major asset owners in Japan to raise their concerns about FTSE Russell's move. Concerned parties include the Government Pension Investment Fund (GPIF), one of the world's largest asset owners and a major bond investor.

FTSE Russell announced that it had given its final approval to include Chinese bonds into the FTSE World Government Bond Index (WGBI) on March 29 over a period of three years from the end of October, to reach an eventual weighting of 5.25% of the index. That would make China slightly larger than the UK.

The UK-based index provider is not the first to introduce Chinese government bonds into a key index; JP Morgan in February 2020 and Bloomberg Barclays in March 2019 have respectively done so in some of their benchmark products as well.

However, unlike the other two index providers, a large number of passive funds use the WGBI as their benchmark. All-told, roughly $2.5 trillion of fund assets were tracking the WGBI as of February, far higher than the volume is now tracking other index that includes China government bonds. That compares to around $200 billion for JP Morgan's Government Bond Index Emerging Markets (GBI-EM) index.

FTSE Russell's introduction of Chinese government bonds is proving tricky for some investors in part because the country maintains controls over its currency and the outflow of funds from its borders. Concerns also circle around bond settlement and a generally lower level of understanding about the machinations of China's onshore government bond market.

The index provider appears to have recognised this, having extended its phase in period from just the one-year process it flagged in last September. It said it had decided “a more conservative” schedule was appropriate following feedback from market participants, which included concerns from Japanese investors around settlement and liquidity.

FTSE Russell did not reply AsianInvestor’s emailed questions exactly what worries investors had raised when discussing the index’s introduction of China government bonds. Ariel Bezalel, head of strategy for fixed income at Jupiter Asset Management, believes the longer time frame is sensible, given some investor worries about both accessing the country and broader geopolitical risks.

“Political tension between the major western economies and China on a range of issues is one of the concerns,” Bezalel told AsianInvestor.

In light of this, Bezalel believes introducing the full weighting over three years should make it easier for international investors to build an exposure to Chinese bonds that could amount to $150 billion as a result of the country’s inclusion in the index.

There are good reasons for investors to favour of the inclusion of Chinese government bonds. At the top of the list is the fact that they typically offer far more appealing yields than those of most other governments.

China’s 10-year government bond yield stood at 3.23% on April 6, well ahead of most major countries according to World Government Bonds data. By comparison, the US’s 10-year Treasury yield was 1.658% on the same day 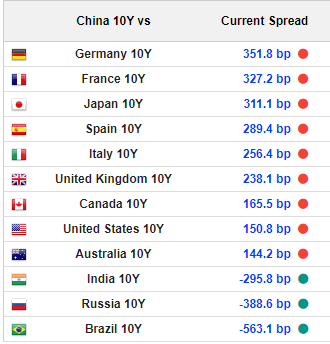 On the downside, that also means they would be expensive to take short positions against the index. “With the weighting likely to reach a significant 5.25%, being underweight Chinese government bonds will be quite a significant short position to hold,” said Bezalel.

While the yields are appealing, investors have some concerns around access to and the stability of the government bonds of the world’s second-largest economy. Japanese asset owners have been some of the biggest sceptics.

Two months ago, FTSE Russell faced resistance from several of the nation’s investors, Japan's GPIF, the world’s largest pension pot. They raised several concerns, including the lack of full convertibility in the Chinese renminbi, bond liquidity and settlement issues, according to a Reuters report.

GPIF’s scepticism is particularly notable, given its sheer size: as of the third quarter last year it invested 25.7% out of its ¥179 trillion assets into foreign bonds and another 25.36% into foreign equities, according to its latest the quarterly report. It is also a sizeable user of FTSE Russell’s WGBI index. According to its 2019 annual report, the pension fund had ¥15.78 trillion or 8.8% of its assets tracking the index.

Its reticence over the inclusion of China sovereign bonds has left markets wondering exactly whether it will allocate much into the instruments this year. It may prove reluctant to do so, not least because it does not want to potentially spoil a good thing. GPIF has enjoyed a cumulative return of 3.18% from its foreign bond investments since 2001, making them the best performing major asset class in its portfolio.

Other investors remain wary of lingering tensions between the US and China, particularly given the willingness of the latter to micro-manage its economy.

Beijing has often tightened or loosened debt liquidity in its economy, largely via the state-owned banks, both to manage debt growth and encouraging a steady clip of economic expansion. Were trade tensions, tariffs and sanctions between the US and China to mount, this could cause more economic instability – and the need for more government borrowing.

Jolie Ho contributed to this article.