Every Chinese New Year, AsianInvestor makes 10 predictions about developments that will affect global financial markets and the portfolios of Asian investors, especially asset owners. Today we consider whether the bourses of Hong Kong and Shanghai could enjoy a bumper year on top of strong performance in 2020, and lead the world for IPO volumes.

The current appetite for attractively placed stock market debutants from China was underscored by the initial public offering of Kuaishou in Hong Kong.

The Chinese TikTok-like video-sharing mobile app company saw its shares skyrocket 161% on their first day of trading (February 5), to close at HK$300 ($38.70) apiece. Its success could well be the tip of the iceberg.

Investors remain sensitive to developments in the global economy, anxiously await news of vaccine rollouts, and are keeping a close eye on how the antagonistic relationship between the US and China will evolve under Joe Biden. Yet despite these issues, they have become increasingly eager to invest into promising new companies.

The market appetite for global IPOs (including re-listings and new bourse listings) recovered from a Covid-19 dominated first half of 2020 to record an annual rise of over 23% in terms of proceeds compared to the previous year, according to a KPMG report published on December 10.

What’s more, the HKEX and SSE were responsible for half of the 10 largest IPOs (including new listings) in 2020. 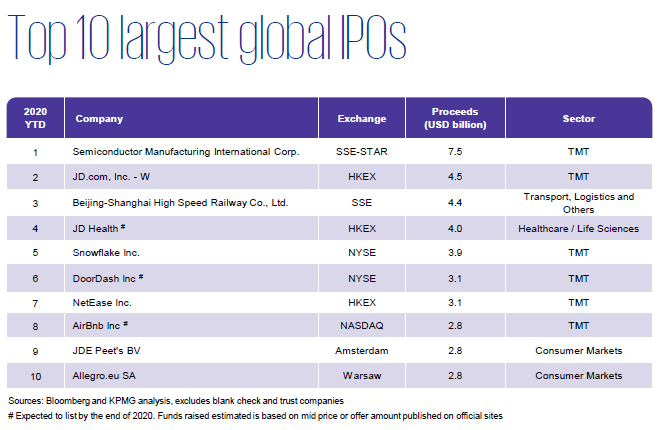 Will this continue in 2021? All the signs say yes. Indeed, there are enough signs of positive momentum that the Hong Kong, Shanghai and Shenzhen stock exchanges could potentially break fund-raising records this year.

Xome observers already predict a decade's high of new equity issuance for China; PwC predicts there will be 430 to 490 A-share IPOs this year, accounting for total fundraising of Rmb450 billion to Rmb480 billion, or between $69.7 billion and $74.3 billion. Simlarly, the accounting firm anticipates 2021 will be a bumper year for Hong Kong, forecasting 170 IPOs on the HKEX that raise a combined HK$420 billion to HK$460 billion ($54.2 billion to $59.3 billion).

A few factors support such confidence. First, Hong Kong’s IPO market could particularly benefit from a continuation in frosty relations between the US and China, as an array of China-based by US-listed companies continue returning home for either a new or secondary listing.

There is also the prospect of Ant Financial returning with its delayed mega-IPO in Shanghai and Hong Kong if it can satisfy the issues the People’s Bank of China and other regulators have with its planned market debut. However, any such debut is likely to be closer to $150 billion than original talks of up to $300 billion, according to some analysts.

International asset owners and investors, which are typically less geography-sensitive but keen to build exposure to exciting new companies, would probably be willing to support the plans of Ant Financial and other tech-linked Chinese companies, even if they shift locales. Indeed, several asset owners have already expressed a desire to more explicitly allocate funds towards China-linked investing as more assets are distributed by corporates from the nation.

In addition to this, several regulatory reforms should also support more IPOs.

On February 5, the China Securities Regulatory Commission approved the merger of Shenzhen Stock Exchange’s main board with its small cap-focused SME board. The move is aimed at simplifying the structure of trading at the bourse and could encourage smaller companies to list with the hope of getting a wider audience.

In addition, Hong Kong’s HKEX announced on February 1 it would allow eligible A-shares listed on Star Market into Stock Connect. Star Market is the SSE’s Sci-Tech Innovation Board, and the decision therefore offers international investors the possibility of using the Connect agreement between the Hong Kong and Shanghai bourses to access promising Chinese tech-linked growth companies.

Indeed, Stock Connect could end up becoming a particularly central avenue of investment, as more international investors foreign investors seek to skirt US-China geopolitical tensions to invest in fast-growing tech companies based in the latter.

Year of the Ox outlook: Will developed markets conquer Covid?

Risk appetite and asset valuations are at record levels in anticipation of a strong global recovery from the pandemic. Is the outlook justified for this lunar year?
Fund Managers
Joe Marsh

For the Year of the Ox, AsianInvestor offers predictions on some key market developments. Today: Will emerging market equities outperform developed market equities?
From the Editor
The Editors