Prudential Corporation Asia (PCA) has appointed Ben Rudd as chief wealth officer for Hong Kong after he has spent four years as chief investment officer for the life insurer's operations in the territory.

“In this role I will be responsible for accelerating and broadening Prudential’s deployment of wealth solutions to our Hong Kong customers,” he announced on LinkedIn on Thursday (March 25).

He added that there would be "lots more announcements to follow in the coming months", and a senior Hong Kong-based banker confirmed that there were "big developments going on" at the firm. 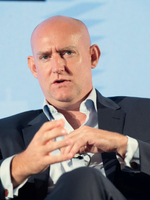 Rudd told AsianInvestor: "There is massive growth in the wealth space at the moment and I’m excited to be able to drive this in Hong Kong."

He added that there would be a separate announcement on Prudential's team structure in Hong Kong in due course.

Rudd was chosen as Standout CIO for AsianInvestor's Institutional Excellence Awards last year. Since joining Prudential in 2017, he has introduced several actions including a total portfolio approach, which involves pooling knowledge and analysis about potential risks and returns across asset classes.

Rudd had joined Prudential as part of a reorganisation of its investment team structure in Asia, under which it appointed CIOs for all of its major markets in the region, also including Indonesia, Malaysia, Singapore and Taiwan.

PCA's investment team has undergone further changes since then under the leadership of chief executive Nic Nicandrou and increased its focus on the China market. The firm's asset management arm, Eastspring Investments, has also seen major upheaval in recent years, including a buildout and subsequent cutback of alternative investment capabilities.

Some of the changes were related to the group-level de-merger at PCA's parent, UK-based Prudential PLC, that was finalised in October 2019.

Prior to joining Prudential, Rudd had been CIO at Hong Kong-based family office Caravel since March 2014. Before that he was head of overseas investment in Hong Kong for Chinese insurer Ping An, and had also led investment strategies at HSBC Investments.

This was a breaking story; AsianInvestor published an update announcing the new CIO on April 7.

Richard Morrow and Joe Marsh contributed to this article.