The appointee will act as a ‘chief of staff’ in operational matters for Suyi Kim, head of Asia Pacific, said the institution in a job advertisement. The responsibilities will include acting as Kim’s delegate for internal operational or risk committees and providing support on business development activities

The newly created managing director role is a testament to CPPIB's commitment to Asia Pacific and the region’s growing importance to the fund, a spokeswoman told AsianInvestor. The C$476 billion ($378 billion) fund has around 180 staff across its three offices in the region in Hong Kong, Mumbai and Sydney.

As of December 31, Asia Pacific accounted for nearly 30% of the fund’s portfolio, she added.

Abu Dhabi sovereign wealth fund Mubadala is building a environment, social and governance (ESG) investment team, having named Derek Rozycki in January as its head with a mandate to hire. “Derek was appointed the head of a newly created division focusing on responsible investing and all things ESG,” a spokeswoman told AsianInvestor. “He is currently recruiting a new team to report to him.”

Mubadala is seeking two senior professionals to help evaluate ESG-related risks and opportunities for investments, according to a post on Linkedin.

Previously the $232 billion fund’s responsible investment efforts fell under the enterprise risk management division, said the spokeswoman. “But with ESG’s growing significance and Mubadala’s commitment to responsible investing, the company’s leadership felt that now was the time to create a dedicated team.”

In a webinar hosted last week by the International Forum for Sovereign Wealth Funds, Rozycki outlined how Mubadala was addressing the challenge of measuring and reducing the carbon impact of its investee companies.

Rozycki has been with the fund since 2005 and his most recent role before heading the responsible investment team was as chief financial officer for technology, manufacturing and mining. 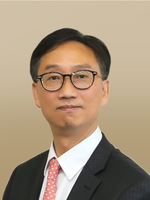 The Hong Kong Monetary Authority (HKMA) has appointed Edmond Lau as deputy chief executive with effect from April 2021. He will be responsible for overseeing the work of external monetary management and research departments, reporting to Eddie Yue, the CEO.

Lau is currently a senior executive director at the de facto central bank, a position he has held since returning to the institution in October 2019. He originally joined the HKMA in 1997 as division head for banking development, before being promoted as executive director for strategy and risk in 2005. He was appointed executive director for monetary management in 2007 and held the role until 2013, when he resigned to "pursue further studies", according to his official biography.

Lau then joined HKMC Annuity as its chief executive officer in 2017, before returning to the HKMA in 2019.

The two appointments follow the departure of Fabien Jeudy who was president of international hubs and Hong Kong CEO. Gilani reports to Léo Grépin, Hong Kong-based Sun Life Asia president, and Lam will report to Gilani after he obtains regulatory approval to take up the Hong Kong CEO role. A company spokeswoman declined to comment on when Lam is expected to obtain the nod from the regulator. KKR has appointed Tom Lee in a new role as Sydney-based head of Australia and New Zealand real estate, effective from May 3.

Lee will oversee the US private equity firm's property platform across the two countries. He was most recently Sydney-based chief executive of Logos, a pan-Asia logistics real estate investment manager.

A spokeswoman for KKR said Lee will report to John Pattar, head of Asia Pacific real estate, and will also work closely with Scott Bookmyer, head of Australia and senior members in the Australia team.

She added that, prior to Lee's appointment, KKR had real estate focused investors based in Sydney, reporting to Pattar.

Before joining Logos, Lee worked in senior positions at BlackRock, MGPA and Lendlease in Asia, Europe, US and Australia. A spokeswoman for Logos did not immediately respond to questions on Lee's departure. Based in Singapore, he is the first holder of the role to be based outside the UK.

Brookes will retain his Asia Pacific portfolio as well as his leadership of the Asia transactions team, the announcement said. A spokeswoman confirmed he was not being replaced.

He now reports to Alistair Elliott, senior partner and group chairman, who is based in the UK. Brookes previously reported to Andrew Sim, UK-based managing director for Europe.

The global head of capital markets function was previously handled by Sim, who remains with the company but whose role is refocusing on Europe, the Middle East and Africa, the spokeswoman clarified. The Sydney-based position is newly created, according to the announcement. Capital raising was previously managed by a group of executives within the business, a spokeswoman said. Hong Kong-based Raffles Family Office has announced the appointment of its inaugural independent advisory board, which was launched on March 24.

Christina Lau, board adviser at Infinitus Property Investment, and David Chang, senior adviser for Greater China at Franklin Templeton Investments, join the multi-family office as the first members of the new board. Lau and Chang retain their other engagements.

They will advise on engagements involving complex family structures, according to the announcement.

Raffles's founder and chef executive, Chiman Kwan, said the new board had been created to help deliver more personalised solutions.

A spokeswoman said RFO planned to add further members to the board.

Article updated to include KKR comments and detail on the appointment of Tom Lee.